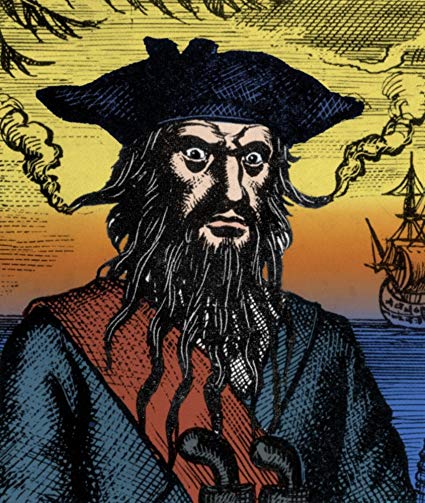 The most famous pirate of all time, Blackbeard, died three hundred years ago this week. He inspired Robert Louis Stevenson's Long John Silver and J. M. Barrie's Captain Hook, and has been portrayed on film by actors like Ian McShane and Peter Ustinov. As well known as he is, there is much about him that remains mysterious.

We still don't know his real name. The facts of Blackbeard's early life have not survived, not even his last name. His true name is usually given as Edward Teach, but sources from his lifetime say his last name was Thatch. Either might have been an assumed name, and we will never know for sure. We do know that he was born about 1680, and that he started his seafaring career in England's Royal Navy. Described as a tall, slim man with a big black beard, the origin of his nickname is no mystery.

We don't know what his flag looked like. That Blackbeard sailed under a black flag is certain, but what image, if any, the flag bore is unknown. During the Golden Age of Piracy, there were many frightening flags, but the design attributed to Blackbeard originated in 1912 - long after Blackbeard's lifetime.

His flagship had a chilling name. In 1717, after capturing the 200-ton French slave ship La Concorde (along with some twenty pounds of gold dust from Benin), Blackbeard gave the smaller of his two pirate ships to the French sailors that chose not to join him. He added more cannon and rechristened the ship Queen Anne's Revenge. Blackbeard might have chosen this name in remembrance of the War of the Spanish Succession (1701-1714), known in the New World as Queen Anne's War, and during which he had served in the Royal Navy. He also might have named his ship out of loyalty and affection for Queen Anne, the last Stuart ruler, who reigned from 1701 to 1714.

He was surprisingly peaceful. Blackbeard cultivated a reputation so fearsome that crews surrendered without a fight. An author from 1724 wrote that Blackbeard inserted lit fuses "under his hat, which appearing on each side of his face, his eyes naturally looking fierce and wild, made him altogether such a figure that imagination cannot form an idea of a fury, from hell, to look more frightful." With his hair seemingly afire and a half-dozen pistols slung across his chest, he must have cut a terrifying figure.

By getting ships to surrender without firing a shot, Blackbeard got the vessels, their cargo, and their crew intact.

He treated his crew well. A merchant or naval sailor's life had a lot of unpleasantness about it. Bad food and mistreatment were sadly common, with captains using beatings and the lash to keep order. Pirate crews were much more democratic: leaders were elected by the crew and any treasure was divided evenly. Moreover, pirates who sustained serious injuries received the first cut of the spoils, before the rest was split among the crew, in what might be the earliest form of worker's comp insurance.

He headed an integrated crew. A man's skills, not his skin color, mattered to Blackbeard. Among Blackbeard's closest men were sailors of African origin; about seventy served aboard Queen Anne's Revenge. Some, like the man known as Black Caesar, had fled enslavement. A war chief in his native land, Caesar and his men were lured aboard a ship with the promise of trading rich goods; the ship set sail while Caesar was aboard, and he and his men were imprisoned in the hold to be sold as slaves. As the ship approached the Florida coast, a hurricane struck. A sailor who had befriended Black Caesar freed him, and the two loaded the ship's boat with provisions and escaped. Black Caesar joined Blackbeard in the early 1700s and stood by him to the end.

He was accused of swindling his men. Blackbeard's beloved Queen Anne's Revenge met her doom when she ran aground on a sandbar in what is now Beaufort Inlet, North Carolina on June 10, 1718. As explorations of the wreck have shown, Blackbeard left little treasure behind. That, along with how he disbanded his fleet, putting some of his men ashore, led to the conclusion that he had wrecked QAR deliberately in order to avoid splitting the loot with his crew. But those same explorations of QAR's remains showed that Blackbeard and his men had tried to save the ship by shifting ballast to the middle of the ship in an attempt to float the bow; also, the ship's 3000lb. anchor was found lying 450 feet away, as though the men had tried to use the anchor to pull the QAR off the sandbar. It doesn't seem likely that Blackbeard would have gone to such lengths only for show.

His head was taken as a trophy. After the wreck of his ship, Blackbeard sought and received a pardon, and tried settling down, marrying and selling off some of his ill-gotten gains. Before long, though, he was back in action, plundering merchant ships off the Atlantic coast. Blackbeard died in hand-to-hand combat with Lt. Robert Maynard of the Royal Navy on November 22, 1718. Maynard reported that Blackbeard had sustained five bullet wounds and twenty "dismal cuts." The British beheaded Blackbeard and threw his body in the sea. They took the pirate's head and hung it from their bowsprit before delivering it to the Governor of Virginia, who had it displayed on a tall pole at Hampton Roads. Rumor has it that Blackbeard's skull wound up as a silver-lined punch bowl, but as with so much else about history's most famous pirate, no one knows for sure.

For more about Blackbeard: