The Gales of November

The Gales of November 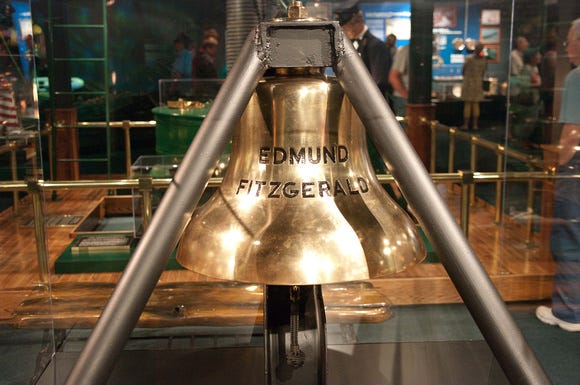 November is a month for unpredictable, dangerous weather on the Great Lakes. The most ferocious winds don't usually roar in until late in the month, as they did in 1905. Over two days near the end of that November, the "Mataafa Storm" damaged or destroyed 29 ships on Lake Superior, including the steamer which gave the storm its name.

On November 9, 1975, two ships set out, one from Minnesota and one from Wisconsin's northern shore, both laden with more than 25,000 tons of iron ore pellets. They were the Arthur M. Anderson and the Edmund Fitzgerald, each under the command of an experienced captain. In the dead of night, the gales of November came early and soon took the Edmund Fitzgerald to the bottom of Lake Superior, as Gordon Lightfoot's song describes.

According to Ed Belanger, then a cadet aboard the Anderson, the weather was good that first day. A big storm on the Great Plains was expected to skirt the southern coast of Lake Superior the next day, so the captains had their eyes on the weather during the two-day voyage across the largest Great Lake. By the evening of the 9th, the storm had changed course, and the two freighters did the same, taking a northern route to shelter under the hilly Canadian coastline. Around 1am on November 10, the storm struck in earnest, lashing the Fitzgerald and Anderson with rain and snow squalls. The fierce waves tossed the freighters about so that it was not safe to cook; Belanger said the men snacked on peanut butter and crackers "for about a day and a half." After a brief respite at midday, the storm intensified, with snow howling in on hurricane-force winds. The waves grew so big that they interfered with the ships' radar signals. The two captains, Jesse "Bernie" Cooper on the Anderson and Ernest McSorley on the Fitzgerald, stayed in radio contact with each other. At 3:30pm, Captain McSorley reported that the Fitz had a broken railing, two missing ballast vent covers, and was taking on water, but that the men had the pumps working to keep ahead of it. The ship's radar had also been knocked out. McSorley slowed the Fitzgerald to allow the Anderson to catch up, and the two freighters headed for Whitefish Bay, with the blinded Fitzgerald relying on the Anderson for radar navigation. When the air cleared between snow squalls, the men on the Anderson could see the Fitzgerald's lights, ten miles ahead of them. 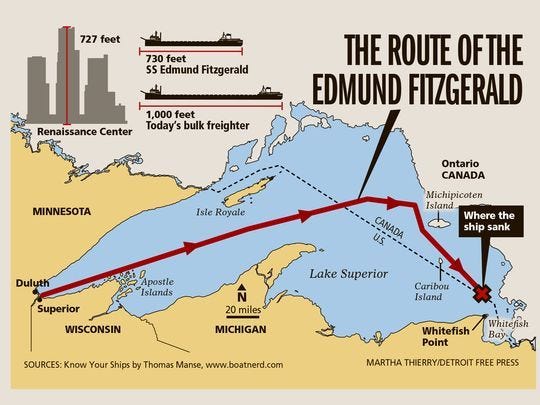 Just before 7:00pm, Captain Cooper felt the ship lurch, as though something had struck it, and looked up to see an enormous wave smash down on the ship from astern, driving the Anderson's prow down into the water. Captain Cooper said, "Then the Anderson just raised up and shook herself off of all that water – barrooff – just like a big dog. Another wave just like the first one or bigger hit us again." Ed Belanger, who was in the pilothouse with Captain Cooper when the rogue waves hit the Anderson, estimated that they topped 35 feet. 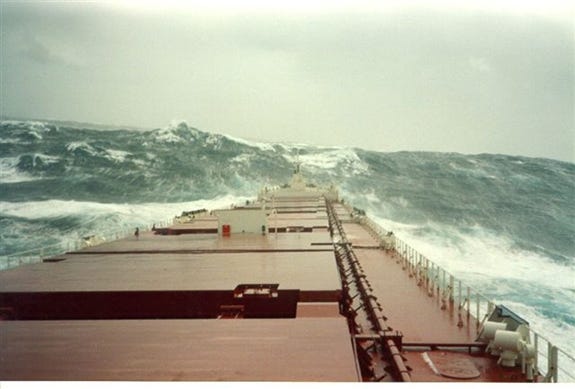 The final radio communication with the Fitzgerald came at 7:10pm, when Captain McSorley told Captain Cooper, "One of the worst seas I have ever seen. We are holding our own." By 7:15, the ship had disappeared from radar and its lights had vanished from sight. When the Edmund Fitzgerald did not reappear and did not respond to radio calls, Cooper contacted the Coast Guard at Sault Ste. Marie to report the missing freighter. What happened in those five minutes between the last radio contact and the Fitz's sinking has fueled the imaginations of experts and amateurs alike. Lightfoot's song sums up several theories about what caused the Fitz to sink.
"They might have split up." In November 1966, the freighter Daniel J. Morrell broke up in a storm on Lake Huron and sank, killing all but one of the crew. The survivor, Dennis Hale, was clad only in shorts, a pea coat, and a kapok-filled life jacket when he abandoned the Morrell with three shipmates. Hale endured forty freezing hours in an open life raft, and by the time the Coast Guard spotted them, his companions had succumbed to the cold.
In his book Graveyard of the Lakes, Mark L. Thompson writes that freighters built before 1948 were made from a high-sulfur steel that became brittle in the cold. In his conversation with Captain Cooper, the Coast Guard radio operator wondered if the Edmund Fitzgerald had "split apart at the seams like the Morrell did a few years back." Since the Fitz was built in 1957, after standards had improved, it seems unlikely that brittle steel was to blame for its demise.
"...or they might have capsized." Even a ship the size of the Fitz could have been rolled over by the massive rogue waves described by Captain Cooper and Ed Belanger, especially if, as Captain McSorley had said, the ship was already listing to one side.
"They may have broke deep and took water." Cooper had seen the Fitz pass "too close" to Caribou Island and over a stony reef called Six-Fathom Shoal.  It's possible that the Edmund Fitzgerald struck bottom as she passed over the reef. A hard hit could have cracked the hull and caused the hold to fill with water. Captain McSorley reported to Captain Cooper that he had the ship's pumps working, and in the hours between that communication and the Fitz's vanishing, McSorley said nothing to indicate that he was concerned about the amount of water coming in. Captain Cooper attributed the ship's loss to several factors. He believed the Fitzgerald had bottomed out on Six-Fathom Shoal, causing the ship to take on water for hours as the storm worsened, and that the heavy seas finished her off.  The captain said that after the Arthur M. Anderson shook off the two gigantic waves, "I watched those two waves head down the lake towards the Fitzgerald, and I think those were the two that sent him under."
Once Captain Cooper reached the U.S. Coast Guard in Sault Ste. Marie, the radio operator asked if he would be willing to turn back and look for the Edmund Fitzgerald. The Anderson had actually reached shelter at Whitefish Bay by the time the search began, yet left safety to try to find the Fitzgerald.
"What else could we do?" said Ed Belanger to the Petoskey News. "They were our brothers out there. If our ship went down, wouldn't we want them to come looking for us? So, we picked ourselves up by our bootstraps and kept going. It took us two hours to reach the site where the Fitz went down." The desperate search yielded no survivors; all twenty-nine men had gone down with their ship. No human remains have ever been recovered from the Edmund Fitzgerald, but in 1995, divers brought up the ship's bell to be placed in the Great Lakes Shipwreck Museum in Whitefish Point, Michigan as a memorial to the lost crew. In 2006, the Canadian government declared the wreck an archaeological grave site, protecting it from further exploration.

To this day, the Arthur M. Anderson still travels the Great Lakes, hauling iron ore. Captain Bernie Cooper retired to Florida and passed away in 1993. After graduation from the Great Lakes Maritime Academy, Ed Belanger served in both the Coast Guard and the Army and now lives in northern Michigan. For more on the Edmund Fitzgerald, including audio of diving expeditions and interviews with members of the crew's families, check out the radio documentary "We Are Holding Our Own" by Wisconsin Public Radio.
Do you remember the wreck of the Edmund Fitzgerald? Share your thoughts with us on Facebook and Twitter.
← Previous Next →
Categories
Recent Posts 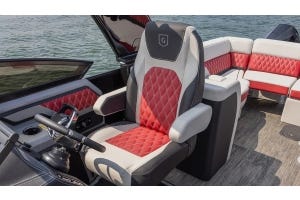