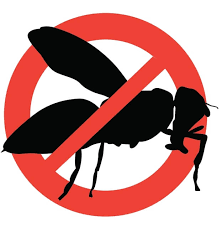 The insect world is filled with beauty: colorful butterflies, elegant dragonflies, and cute ladybugs. It’s also home to less beautiful but mostly harmless creatures like ants and crickets. And then there are the wasps. Wasps are just straight-up jerks.

Okay, wasps do, of course, have their place in the patterns of the natural world. Because of their painful sting, they mostly get a bad rap. In general, wasps are not aggressive and will only sting to defend their nest. They help control the insect and spider populations; one species, the blue mud dauber, likes to eat the venomous black widow spider, making it an ally to humans. Its striking blue coloration makes it look like it's got a custom metal-flake finish.

Just like squirrels and raccoons can set up housekeeping in your boat, so can wasps. The good news is that wasps don’t leave behind the awful, stinky mess that furry critters do, nor do they chew wiring or upholstery, or spread disease. The bad news is, of course, that wasps can sting you. If you are allergic to wasps and find that some have moved in to your boat, call a professional to take care of them, or enlist a non-allergic (and brave) friend to do the job.

Mud Daubers This type of wasp builds its nests from mud, as their common name suggests. Though the nests are impressive feats of engineering, they can cause mechanical damage if they are built inside an intake or other important part. Mud dauber nests have caused engine failure in jet aircraft and can do the same to your boat.

When you attack the nest, wear a long-sleeved shirt and long pants. Use a long-range insecticide spray made for wasps and follow the label directions. Stand as far away as you can and let it fly. Give it an hour or two before approaching the nest and scraping it away. You can also vacuum up the (empty) nest with a shop-vac. Some boaters report successful prevention by spraying surfaces with WD-40.

Paper wasps These guys build nests from chewed wood pulp and can appear inside your boat’s dash, in the engine compartment, under seats—just about anywhere. Hornets also build paper nests and seem to be more aggressive than wasps. Again, wear protective clothing and use a long-range spray to tackle the nest. Paper wasp nests start small and look like roughly-circular honeycombs. It's best if you can catch them at this stage, rather than waiting until the wasps have built a football-sized condominium development on your boat.

We’ve heard that hanging or mounting decoy wasp nests will keep the real thing from turning up in the area, as wasps are territorial and prefer not to build near each other. You can find decoy nests ready-made at garden supply and home improvement stores, but some boaters have used brown paper bags or crumpled balls of newspaper placed around their boats. The WD-40 trick is reputed to work to prevent paper wasp infestation, too.

As with keeping other pests out of your boat, keeping it tightly covered with stretch or shrink wrap during storage will keep out wasps. During the boating season, make checking for wasp activity part of your regular routine so that you and your passengers don’t get a painful surprise.